Put on the sustainability glasses every now and then: Go blue

Sustainability has long been high on the agenda of idealists. But it is only a matter of time before it becomes a requirement for all machines and systems. Jeroen Rondeel of Blue Engineering is firmly convinced of that. A crucial task is reserved for developers. Rondeel explains how you can make a world of difference with just a few simple tools and is involved in the training ‘Design for sustainability‘.

Ecologically, the corona crisis is having a number of positive consequences. After all, the restrictive measures affect our mobility. Fewer cars on the road translates into drastically fewer traffic jams and thus less exhaust fumes. On a global level, you can see the effects in Earth Overshoot Day, for example. That is the day in the year on which we all used more raw materials and nutrients than the earth can produce in that year. That day has been steadily moving forward for decades. In 2020, Earth Overshoot Day jumped back about three weeks to August 22.

Great, of course, but there are still more than four months left that exceed the restorative capacity of the earth. Environmental agreements such as the 2015 Paris Accord are trying to reverse the trend. “The world is waking up and we as technicians are at the base of that change,” says Jeroen Rondeel, director of engineering firm Blue Engineering. “In fact, we can make a huge contribution to reducing the footprint by continuously focusing on sustainability in designs. From architect to engineer, everyone can take his responsibility. Sometimes it just takes a little guts.”

Rondeel himself saw the light when he attended a meeting in the run-up to the 2012 Floriade in Venlo. He heard, among other things, the call from Gunter Pauli, author of ‘The blue economy’. “His message was that we are not dealing well with the earth. That’s red,” Rondeel explains. “An alternative is the green circuit, with which we are taking a step back in our level of prosperity. Or we go for blue and do it radically differently. Inspired by nature, driven by technology. “Wow”, I thought, “I can also contribute to a better world.”

A few years later, Rondeel took the plunge and founded Blue Engineering. Initially with a secondment formula, but the company at the Blue Innovation Campus in Venlo is attracting more and more farm-out projects and complete product development. In that respect, Blue Engineering can be compared to parties such as NTS, VDL ETG or Sioux CCM. “But then with a strong sustainability drive,” Rondeel emphasizes. “Every day we try to implement blue ideas and convert innovations into blue realizations.” At present, Blue Engineering derives about 30 percent of its turnover from blue projects, the rest is more traditional product development work. 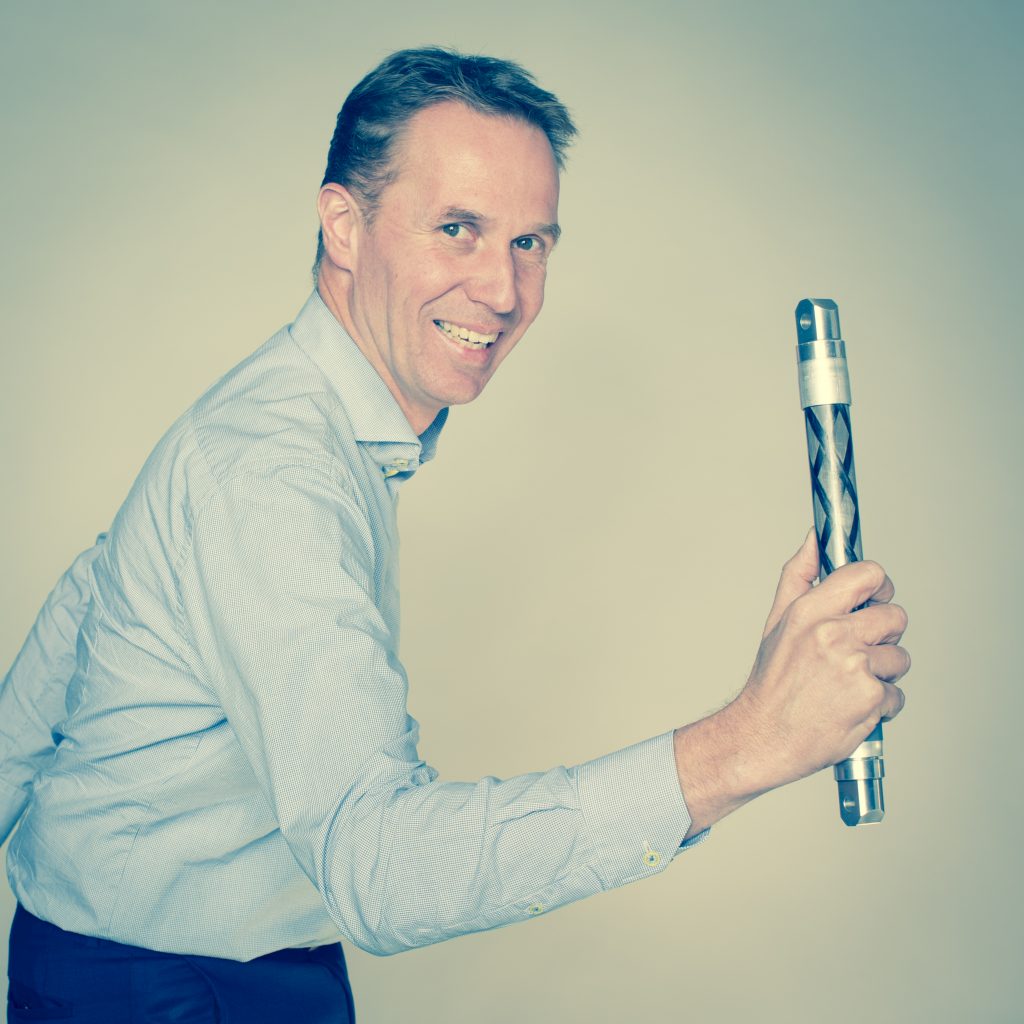 “It doesn’t always work, but we constantly try to look at a design through blue glasses”, says Jeroen Rondeel from Blue Engineering.

An example. Blue Engineering developed its own product, on which it also obtained a patent. “It started with an idea from professor Guus Pemen from the Eindhoven University of Technology,” says Rondeel. “We use plasma to reduce all odors and other emissions in a pigsty.” Normally, this is an application that uses a lot of chemical agents. “Plasma has a cleansing effect. We use plasma-activated water to capture the ammonia and clean it more cleanly.” Blue Plasma is now a spin-off of Blue Engineering.

Rondeel and his colleagues didn’t just tackle the idea because they liked it. “We really needed that: we needed to proof that we were able to realize ideas from the university. Not everyone can do that, but with this process we showed that we play in the Champions League.”

Another example is less spectacular at first sight, but the result is clear. Rondeel holds a flat package in front of the webcam: hair dye. “Normally aluminum foil is used if you want to dye or perm your hair. Quite expensive and not recyclable. For a customer who really works on sustainability, the production process has been turned upside down and the foil has been replaced by coated paper. The company then asked us how much better its new method was. Our analysis showed that CO2 emissions had decreased by as much as 65 percent.”

Sustainability is increasingly in the foreground. Rondeel sees it happening all around him. “Certainly everyone under thirty is very aware of it. We receive a lot of internship assignments and graduation requests from young people who are very busy with sustainability. From mechanical engineering, electrical engineering and software.” Yes, software engineers have a role to play as well. “You can take big steps with smart controls. Just think of something as simple as a sleep mode on a machine. That way you can save 10 to 15 percent.”

And it continues. Rondeel, who studied aircraft construction in Haarlem, always tries to optimize with his mechanical discipline as a starting point. “With software you can often iron out the last wrinkles. But you can also look at it the other way around. For example, you could choose a material that does not fully meet the requirements but is easier to recycle, and invest a little bit extra in software so that it still works. We did that once in a project. A bold decision from the client, but it worked.”

Companies are responding to the sustainability trend and see the financial added value. A good example is Canon. The company has designed some of its copying systems in such a way that it can recycle engines and other parts. Discarded printers are taken apart and components that have not reached the end of their life cycle are passed on to a next printer. “These kinds of examples are all about standardization within an organization and a modular set-up of your machines,” Rondeel clarifies.

A problem that Rondeel and his colleagues encountered soon after the foundation of Blue Engineering is measurability. “For a techie, sustainability can be a abstract concept. What is it? And how do I know that one design is more sustainable than another?”, Rondeel explains. There were, and still are, few tools around that a diehard engineer could use.

“We came across an open source tool for life cycle analysis. This allows us to carry out analyzes of the impact of a company’s processes and products on the environment. We make an x-ray of the sustainability performance, as it were. Blue Engineering’s expertise lies in the translation of this analysis into concrete advice for production processes or, where necessary, a redesign of the product. This way, we can actually help machine builders and mechatronics companies to become more sustainable.”

When it comes to material selection, Blue Engineering is currently integrating a tool for ABCX analysis. “With that method you categorize the materials in your design. A means that the material is ideal for recycling. Substances in which you have to invest to be able to use them again, receive the B label. C is for materials that cannot be upcycled. And, finally, X is for the prohibited materials,’ says Rondeel. ‘With X materials, you seriously have to consider whether you really need them. Sometimes the answer is ‘yes’. Then make sure that it does not end up in the landfill or in the incinerator, but set up a deposit model so that it comes back and you can possibly keep it in a re-use program.”

There are also tools on the market to calculate the energy consumption of your solution. “As with LCA and ABCX, they are still in their infancy,” admits Rondeel. “But that certainly doesn’t mean that all those tools are worthless. On the contrary. If you include the LCA footprint in your requirements from day 1, you can achieve really cool things. The same goes for the ABCX method. Such a tool often works wonders because it pushes you straight to the point. “Maybe I should reevaluate if I can replace that X material?” Just that mindset can make all the difference.”

“It’s not rocket science, more a paradigm shift,” Rondeel continues. “Put on the sustainability glasses every now and then, and you can easily pick the low-hanging fruit. Dare to appoint a person internally or externally who specializes in this matter, and ask them to hold up a mirror to you at review moments. Choose blue. Try an alternative material that may be more expensive than steel or iron, but is better recycled. Or opt for click, screw or clamp connections that are easier to disassemble. Awareness, that is the crux, and then you will experience surprising things.”

This article is written by Alexander Pil, tech editor of Bits&Chips.

How to become a sustainable engineer?