Enthusiastic, hardworking, inspiring, and a team player, these words of praise were given to Hans Vermeulen by Rien Koster when he presented the award which bears his name.

Vermeulen is senior principal architect EUV-optics at ASML, part-time professor at Eindhoven University of Technology (TUE), and trainer at High Tech Institute. The price is ‘for his tireless effort to propagate and innovate the field of mechatronics and precision technology’, said the Dutch Society for Precision Engineering (DSPE).

Vermeulen has an impressive track record within precision mechanics and mechatronics and educating a new generation of precision technologists. After his promotion on precision machining he started at Philips CFT, where he worked with semiconductor equipment, including in the US. In 2007, when ASML took over mechatronics research, he switched to the litho manufacturer. He played various roles within Development & Engineering (D&E) and Research. He was appointed as part-time professor Mechatronic System Design in 2015 at the department of Mechanical Engineering at TUE.

In his field of expertise, Vermeulen pays a lot of attention to the basics, the history, and he also has an eye for new developments. For a long time he was the chair of the Nationale Werkgroep Mechatronica, founded at Philips for distribution and publication of the field.

Two years ago, together with Just Herder from Delft University of Technology and Dannis Brouwer from the University of Twente, he took the initiative to put together a new standard work on design principles. It is an update of the Des Duivels Prentenboek by Wim van der Hoek which has been updated by several leaders in the industry in recent years, under which Koster. The book will appear in 2025 with the title Design Principles for Precision Mechatronics. In the meantime, there is a website live.

The jury called Vermeulen ‘an inspiration, also beyond his technical expertise’. His personal contribution was also emphasized. Vermeulen is able to give his team a lot of room to move forward. 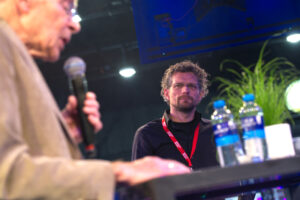 Rien Koster during the eulogy for Hans Vermeulen

The Rien Koster-award goes out every two years to an engineer that has done particularly meritorious work within mechatronics and precision technology. The jury uses the following criteria: oeuvre, creativity, social and commercial relevance and professional appearance. The winner has worked for at least fifteen years in the field, puts theory into practice, contributes to promoting the field and knows how to enthuse colleagues. He/she has shown exceptional competence and creativity and has achieved impressive results, that are acknowledged internally and externally. The Rien Koster-award consists of a money amount, made available by VDL ETG and a trophy made by students of the Leidse instrumentmakers School.