Prof. Dr. Jan van Eijk is awarded the ASPE Lifetime Achievement Award for broad-reaching advances in precision mechatronics and for promoting the active sharing of these advances throughout the technical community.

Jan van Eijk accepts the ASPE Lifetime Achievement Award as a representative of the Dutch community in precision engineering.

As a pillar of this community, he has contributed by initiating and heading innovative applied research activities and by active sharing of industrial expertise. This collaborative spirit was first realized in 1989 with the creation of an in-house mechatronics training program for Philips engineers where industrial trainers taught new engineers how to work in multi-disciplinary teams and to employ each other’s technical strengths in order to reach the best overall result. This course has by now educated some 2500 engineers and established a solid foundation as other training programs were created to cover the additional disciplines. Beginning in 2010, these training activities were continued outside of the Philips organization by the establishment of the “Mechatronics Academy”.

He started his education at the Delft University of Technology with a MSc degree in Mechanical Engineering. Following this, he spent three years abroad working at universities in Pakistan and Sri Lanka as a UNESCO associate before returning to Delft to complete a doctoral program that included a dissertation on the design of flexure mechanisms. He received a Ph.D. in Mechanical Engineering in 1985.

Prof.Dr. van Eijk then worked for twenty-two years at the Philips company in their Centre For Industrial Technology (CFT). The Philips company, based in the Netherlands, has been a birthplace of advances in science and technology since the early years of the twentieth century. This Centre formed the knowledge base for mass production technology in Philips. Research done in the “Natlab” was famous and the development of high-throughput manufacturing machines proved to be an important factor in the decades-long growth of the organization. Throughout his career, Jan van Eijk has had the opportunity to build on this foundation and to work with many excellent engineers in the field of high precision mechatronics.

His unique skills and expertise have arisen from the knowledge and experience gained from working at Philips where he became Chief Technical Officer of Mechatronics. While building a mechatronic technology center of about 200 engineers, he made conceptual contributions to a wide range of applications, including optical disc drive systems and lithography systems. With the start of ASML in 1985, Dr. van Eijk contributed to key concepts and to the architecture of mechatronic elements of ASML’s highly successful lithography tools. The use of a rigorous metrology concept, introduced in 1986, formed a significant contribution to the early lithography machines.

After leaving Philips in 2007 he founded his own company, Mechatronic Innovation and Concept Engineering (MICE), to continue to provide consultancy to world-class equipment manufacturers world-wide. He advises not only on technical concepts and designs for systems, but also on how to develop key components necessary for the successful growth of advanced technology organisations.

His skill in explaining sophisticated concepts in a very accessible way was further heightened by teaching for twelve years as a part-time professor at the Delft University of Technology from 2000 through 2012. There he supervised doctoral students on projects related to using active magnetic bearings for precision applications. As a co-author he contributed to the book “The Design of High Performance Mechatronics” written by Prof. Rob Munnig Schmidt. This book gives an industrial perspective on the multi-disciplinary knowledge used in mechatronic engineering.

Jan van Eijk served on the council of euspen and the board of directors of ASPE for several years. In 2012 he was awarded the euspen Lifetime Achievement Award, and in 2016 the DSPE awarded him the Martin van den Brink award for his leading role in the architecting of high-technology systems. 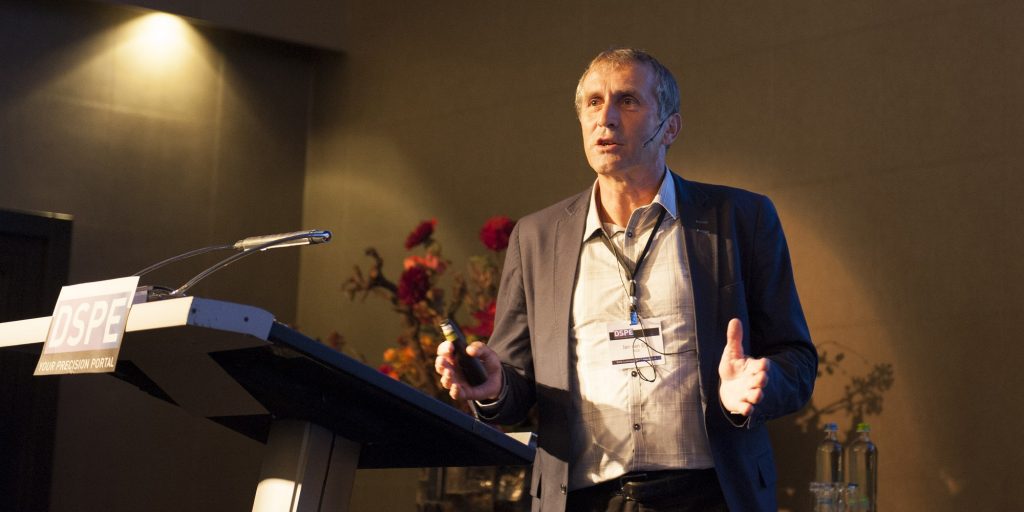 Jan van Eijk speaking at the 2014 DSPE Conference. The winner of the ASPE Lifetime Achievement Award 2021 is committed to sharing knowledge and therefore co-founded the DSPE Conference on precision mechatronics in 2012. (Photo: Jochem Treu)