Jasper Nuyens stepped somewhat eagerly through information technology. He was the first Aibo owner in Belgium and programmed his own Tesla. The biggest embedded Linux problems land on his lap. 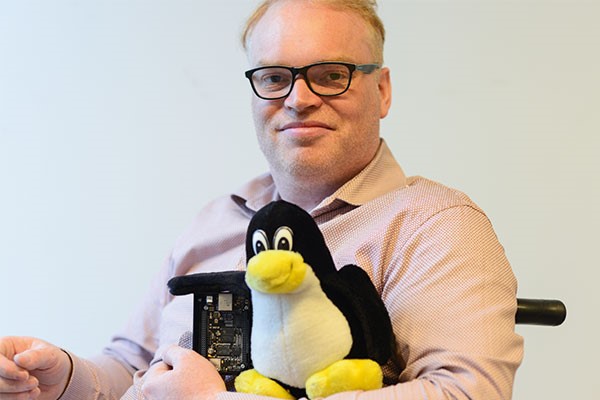 Jasper Nuyens with an OpenSource BeagleBone board that participants use in his embedded Linux training and a hug from Tux, the Linux penguin.

It is Elon Musks’ biggest nightmare that hackers worldwide take control of all Teslas remotely. ‘A doom scenario, but it is not impossible,’ says Jasper Nuyens, founder of Linux Belgium and embedded Linux trainer at the High Tech Institute. One key to gain access to one of the computer systems – the so-called ssh-key of the navigation cluster – is the same for the entire Tesla fleet.

Nuyens knows, because ‘through a friend’ he has secured such a ssh-key (‘ssh’ stands for ‘secure shell’, the standard for communicating with Linux systems). Not to harass Musk, but to reprogram his own Tesla. These cars have different embedded subsystems: Nvidia Tegra-based electronics around the wheel and the media console and ARM64 for the autopilot. It all runs on Linux. Nuyens, among others, adapted his control panel himself. ‘A little customised,’ he laughs. ‘With an X Window application, for example, I make the colours fade.’

Nuyens has a tip for Musk: if you want to sleep peacefully at night, it might be better to give all systems of all Teslas their own ssh-key and store them in a secure central database. This is already happening with a daily changing key for remote access to the central display. ‘An extra layer of safety, why not? It is still true that everyone has the same ssh-key on the navigation cluster and in principle you can obtain them online.’

However, it’s not easy to get into a Tesla. A physical connection with the internal network is required and the dashboard must be open for this. “It is very well shielded,” says Nuyens. Yet his skill with Linux is not the main reason that he has bought one. ‘The decisive argument came to me when I saw the retreated glaciers in Iceland.’

'I would like to make another variant of Tesla's Christmas light show. I already have the Game of Thrones tune ready for it.'

He does not touch the Linux-based system for autopilot. ‘I do not want to do anything wrong with regard to the control of my car. It is possible, people do it, but I, personally, find it a bit too dangerous. That is why I do not play much with the CAN-bus. However, I would like to make another variant of Tesla’s Christmas light show. I already have the Game of Thrones tune ready for it.’

Nuyens acquired a Macintosh computer at the age of nine and founded a computer club a few years later. Not many years later later, he started publishing articles about computers. And then also about Linux. He even authored, in 1996, the books ‘The Internet in Belgium’ and ‘Maximise your Mac’. For the first time, he wrote a review for every Belgian website. ‘There were only a few hundred.’

Nuyens tasted mathematics, physics and computer science at KU Leuven and Hasselt Universities, but did not complete his studies. ‘When I started at university at the age of sixteen, I saw many Internet Service Providers start up. Netvision/Ubizen (now owned by Verizon, RR) also started. I missed that first boat, but I really wanted to grab the internet boom.’ So he stopped studying in 1998 to start his own company at the age of 21.

Two years later, before the dotcom bubble burst, Nuyens sold his business to the NASDAQ listed VA Linux Systems, the company behind Sourceforge and the websites Linux.com, Slashdot and Freshmeat. That was fairly independent at the age of 23. He then set up Linux Belgium and bought the Aibo robotic dog from Sony. He was the first in his country and even in TV programs he was invited to talk about his robot woof. Newspapers wrote hilarious pieces at that time about ‘the young manager with a Saab Cabrio under his rear’ (Het Belang van Limburg).

With Linux Belgium, he focuses on consultancy and training. ‘I’m lucky that they ask me for advice when there are really difficult problems. This ensures that we always receive very special cases and that makes the job very interesting. It also ensures that our course stays up-to-date.’

Although he is no blind follower, Nuyens is very positive about Linux. ‘It is one of the most impressive technical achievements of our century,’ he writes on his Linux Belgium website. ‘More than a billion mobile phones run on Linux-based Android. All known servers work with it. In addition, billions of smart devices have the operating system on board and tens of millions of people use the OS on their PC. Google, Facebook and Twitter, they all run on Linux. ‘

In 2005, Nuyens developed the ‘Embedded Linux’ training course in collaboration with Mind (now Essensium). It turned out to be the very first embedded Linux course in the world. ‘We did it at the request of a customer. Developing a new course for embedded Linux was a lot of work, but we did it anyway.’ To the great surprise of Nuyens and Mind, the training became very popular. ‘In the field of Linux, it is one of the most popular courses in Belgium’, Nuyens estimates. High Tech Institute has been offering the training in the Netherlands for a number of years on an exclusive basis.

‘In the late nineties there was a lot of buzz around Linux for servers. The operating system is still popular for that, but to keep track with the growth of Linux servers, you need far fewer extra system administrators than in the embedded world, where the number of Linux applications explodes, and they all need developers’ explains Nuyens as its success.

The Linux pioneer already worked on a project in 1996, to run a complete Linux-based router from a 1.4 MB floppy disk. ‘This was done in order to use old PCs with a number of network cards as a server or router. It was a big challenge in which the Linux kernel compilation played a very important part. The tricks we had to pull out of our sleeves to make this work were a lot like the first steps of embedded Linux: a small system where you can add many applications.’ The project lives on in current router projects such as OpenWRT and DD-WRT.

Much later, the embedded build systems Buildroot and Openembedded/Yocto became available. ‘We also included that in our training. We always adjust the material to recent developments. We did about a hundred sessions, whilst we are on version 65 of the course.’

In his Embedded Linux training, participants start working with a Beaglebone Black platform. This is a print with a Sitara SOC from Texas Instruments. This American chip manufacturer founded the non-profit organisation Beaglebone Foundation to provide Linux support for these platforms. ‘It is primarily a showcase for the Sitara platform,’ says Nuyens. ‘But it also gives developers a handy step forwards. Everyone can play around with the technology for free. ‘The entire Beaglebone design, the complete PCB layout with all its variants, can be completely reused by customers. By making minor changes to the copied reference design, you can speed up the roll-out of new products.’

If desired, Nuyens also has other variants of the course available. It is also possible to run the training on Freescale’s i.MX 6 platform (nowadays NXP). ‘This is also a popular platform in the Linux world. i.MX has single, double and quad core variants. The latter are more powerful for multimedia applications.’ Other variants on which the embedded Linux training can take place are the ZedBoards from Avnet and Atmel’s AVR32 platform. Training on these boards usually happens on specific request and often in-house at customers.

This article was published earlier in the magazine Bits&Chips: read it here.

High Tech Institute organizes the 'Embedded Linux training' once a year in Eindhoven.