Six reasons why your digital transformation is failing

The common theme over the last weeks, as I started to talk to more and more folks in companies, is the difficulty of realizing digital transformations. Granted, I work with many who are expected or having taken it on themselves to drive the digital transformation of their organization, but I believe the challenge is widespread.

Especially in the embedded systems industry, there’s a large group of people who originate in the mechanical or electronics world and can’t see beyond the limits of their technological perspective. With a digitalizing business, mechanics and electronics don’t go away – we still need a chassis and a computing platform. The main difference is that these technologies shift from being differentiating to being commodity (see figure). This causes a shift in perspective as you drive innovation when something is differentiating and you look to minimize cost when something is commodity. When the precious engine, braking system or propulsion chain suddenly needs to be optimized for cost instead of innovation, all working with that technology suddenly resist change. But the fact of the matter is that in virtually every industry, the differentiation is largely generated through digital technologies, ie software, data and AI. 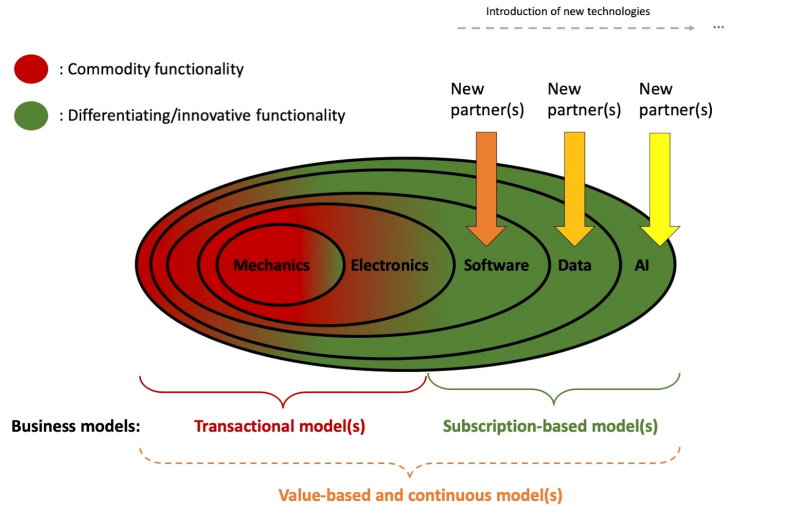 We also see a shift in business model. In industries dominated by ‘atoms,’ the primary business model tends to be transactional. You buy a box, use what’s in the box until it’s old and then you buy a new box. Industries that focus primarily on ‘bits’ tend to use continuous business models such as subscription and service models. In these industries, customers expect the offerings that they’re using to get better all the time. This shift may seem trivial but has huge implications on the architecture of your products, the way R&D is conducted, how you support your customers and even the company’s financial model.

With digital transformations, it seems to me that there are at least six behaviors that can be identified. First, the “it’s not my problem” syndrome. Here, the patient thinks that digitalization has to do with data being shuffled back and forth between boxes that are outside his or her area of responsibility. As it’s not in scope, it’s not a problem that the individual has to contend with nor worry about.

The second challenge is the “too complicated” case. I recently read about a study where people were offered to sit on a chair and think without distractions (like their mobile phone) or receive mild electric shocks while being allowed to distract themselves with an app of their choosing. Interestingly enough, a large majority preferred to receive electric shocks over being ‘forced’ to think. Digital transformation represents a fundamental paradigm shift and there’s a significant group of people in companies that simply can’t be bothered to logically think through the consequences of this.

Even when individuals and teams accept data-driven practices, one interesting observation that we recently got confirmed in several companies is that although many organizations have top-level KPIs and many teams have local KPIs, there’s no real connection between the two. The consequence is local optimization based on team metrics as there’s no agreed-upon way to connect local and global KPIs. As local metrics typically are short-term and based on the current, traditional business, they slow down or stop any digital transformation.

A consequence is the “local bastardization of global strategy” challenge. As the link between the company strategy and the team actions is tenuous at best, team members will develop a rhetoric on how what they’re doing today is actually supporting the company strategy. Any overly obvious mismatches are then explained away by referring to the local and short-term challenges that need to be overcome first.

The fifth behavior I run into a lot is the “it’s too early” argument. Here, the protagonist claims to agree with all the points made related to the consequences of digitalization but in the same sentence claims that these implications will only realize themselves years down the line. Consequently, it’s too early to start making changes.

'Customers won’t ask but simply vote with their feet'

The final excuse that gets used almost continuously is that “customers aren’t asking for it.” This seems like a quite reasonable argument until you realize that all companies that waited until customers asked them for new functionality, business models or technologies have gone out of business because they were disrupted by more enlightened competitors or new entrants. Customers will simply go somewhere else when you haven’t predicted their needs. They won’t ask but simply vote with their feet.

Concluding, the realization of digital transformation in many companies is a slow, brutal, uphill battle that leaves proponents frustrated, tired and scarred. I’ve described six typical behaviors of so-called “rejectors” that you should be aware of if you’re to have any hope to overcome this resistance. The digital transformation is real, but many incumbents are moving too slow to avoid disruption.

In his course “Speed, data and ecosystems”, Jan Bosch provides you with a holistic framework that offers strategic guidance into how you successfully can identify and address the key challenges to excel in a software-driven world.