The AI of digitalization

This article is the last of four where I explore different dimensions of digital transformation. Earlier, I discussed business models, product upgrades and data exploitation. The fourth dimension is concerned with artificial intelligence. Similar to the other dimensions, our research showed that there’s a clear evolution path that companies go through as they transition from being traditional companies to becoming digital ones (see the figure).

In the first stage, the company is still focused on data analytics. All data is processed for the sole purpose of human consumption and interpretation. At this point, things are all about dashboard, visualization and stakeholder views. 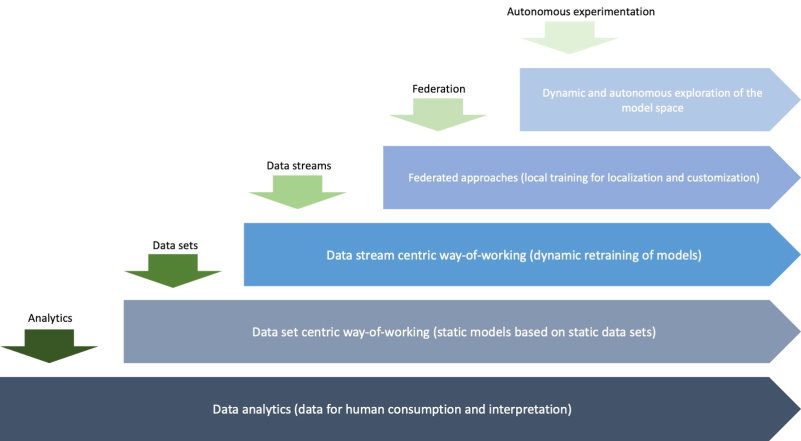 Evolution of the use of AI technology.

In the second stage, the first machine learning (ML) or deep learning (DL) models are starting to be developed and deployed. The training of the models is based on static data sets that have been assembled at one point in time and that don’t evolve unless there’s an explicit decision taken. When that happens, a new data set is assembled and used for training.

In the third stage, DevOps and MLOps are merged in the sense that there’s a continuous retraining of models based on the most recent data. This data is no longer a data set, but rather a window over a data stream that’s used for training and continuous re-training. Depending on the domain and the rate of change in the underlying data, the MLOps loop is either aligned with the DevOps loop or is executed more or less frequently. For instance, when using ML/DL for house price prediction in a real-estate market, it’s important to frequently retrain the model based on the most recent sales data as house prices change continuously.

Especially in the software-intensive embedded systems industry, as ML/DL models are deployed in each product instance, the next step tends to be the adoption of federated approaches. Rather than conducting all training centrally, the company adopts federated learning approaches where all product instances are involved in training and model updates are shared between product instances. This allows for localization and customization as specific regions and users may want the system to behave differently. Depending on the approach to federated learning, it’s feasible to allow for this. For example, different drivers want their adaptive cruise control system to behave in different ways. Some want to have the system take a more careful approach whereas others would like to see a more aggressive way of breaking and accelerating. Each product instance can, over time, adjust itself in response to driver feedback.

Finally, we reach the automated experimentation stage where the system fully autonomously experiments with its own behavior with the intent of improving certain success metrics. Whereas in earlier stages, humans conduct A/B experiments or similar and the humans are the ones coming up with the A and B alternatives, here it’s the system itself that generates alternatives, deploys, measures the effect and decides on next steps. Although the examples in this category are few and far between, we’ve been involved in, among others, cases where we use a system of this type to explore configuration parameter settings (most systems have thousands) in order to optimize the system’s performance automatically.

'Using AI is not a binary step, but a process that evolves over time'

Concluding, digital transformation is a complex, multi-dimensional challenge. One of the dimensions is the adoption of AI/ML/DL. Using AI is not a binary step, but rather a process that evolves over time and proceeds through predefined steps. Deploying AI allows for automation of tasks that couldn’t be automated earlier and for improving the outcomes of automated processes through smart, automated decisions. Once you have software, you can generate data. Once you have data, you can employ AI. Once you have AI, you can truly capitalize on the potential of digitalization.

Have a look at the training of Jan Bosch 'Speed, Data and Ecosystems'.