In-depth optics training keeps both students and the teacher sharp

Deep at his core, Stefan Bäumer is an optics fanatic. He finds great passion in teaching because he likes to spread knowledge and, as he says, it keeps him on his toes. With undiminished enthusiasm, he has been providing the optics training “Modern optics for optical designers” at High Tech Institute for years. The training is tough – covering all aspects of optics – but also very valuable, participants tell him afterward.

One of the nice things about the optics, Stefan Bäumer thinks, is the visual. “If you build a set-up in the laboratory with a light or laser beam and lenses, you can use your business card to follow the beam and see what happens to it and how it forms an image. I really like the fact that you can see the effect visually right away,” he says enthusiastically. He likes working in the field because optics are the heart of the optical (measuring) system, determining both the functions and the tolerance of the system. 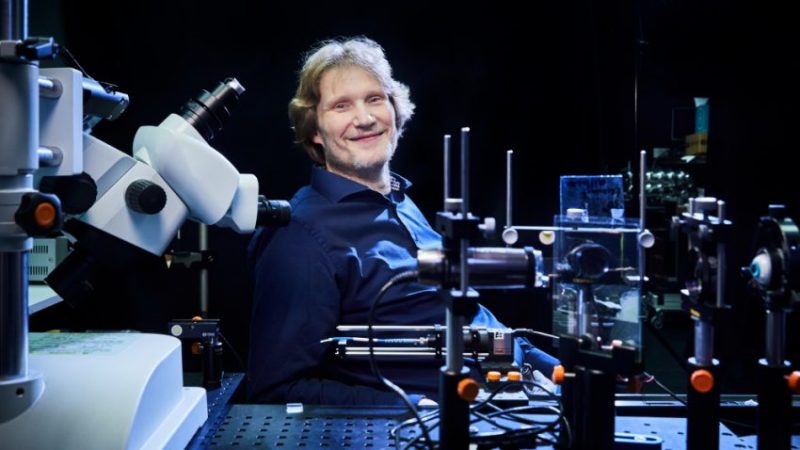 “In the future, we will be moving more and more towards end-to-end modeling,” says Stefan Bäumer, lecturer at High Tech Institute.

Bäumer’s experience in optics goes back a long way. Already, during his Master’s in physics, which he followed at Washington State University, there was a link. Also, during his PhD at the Technical University Berlin, he was involved in optics at the Optical Institute.

After completing his PhD, Bäumer started his career at Philips in Eindhoven. Here he started as an optical designer at CFT and later at Philips High Tech Plastics. After that, he worked for eight years as a senior optical system designer at Philips Applied Technologies and Philips Research. After a short time, as senior principal engineer at Philips Lighting, TNO asked him if he wanted to join their team. He was happy to do so; it allowed him to turn on his light at another organization. After a career of seventeen years at Philips, he switched to the optical group at TNO in Delft.

Now Bäumer has been working as a senior optical designer at TNO for almost eight years. Since 2015, he has also been part of the principal scientists’ group, who help determine technical policy. As a principal scientist, Bäumer is co-responsible for the direction of research in optics at TNO.

To be able to determine which way to go with TNO Optics, it is certainly useful that Bäumer has been in the field for a long time. As a result, he is well informed of developments. “Actually, there are a number of important developments that have led to strong growth in optics. The accuracy with which you can model optical systems has increased enormously. The integration with other disciplines has also greatly improved. In addition, the making of optical elements has improved, because the manufacturing technology has made huge leaps forward. Finally, near-infrared possibilities for detectors and light sources have been added, which are used, for example, in medical research,” explains Bäumer.

Far-reaching technological developments in the field of optical system design have indeed significantly improved the performance of all kinds of simulation programs in recent years. Optics also benefit from this. “I used to work with rather rudimentary optical design programs with which you could model systems and create a layout. There was still a lot of manual work,” says Bäumer. “Nowadays, you can model much faster and more accurately. You can include all kinds of phenomena in your simulations, such as nanostructures and diffraction. The integration with other disciplines such as thermal disciplines, mechanics and the improved communication between software systems of the various disciplines have also led to progress.”

What is certain is that the more sophisticated manufacturing technologies now available have also greatly accelerated optical developments. This is due in part to lathes with much higher precision – diamond turning allows you to create incredibly precise optical surfaces, including free-form surfaces – and new techniques such as magneto-rheological finishing (MRF) and ion beam figuring (IBF). These techniques allow opticians to design optics with much better specifications. This has also led to the emergence of free form optics in the last ten years. This branch of the field designs new optical elements that have no translation or rotation symmetry over the optical axis. This offers room for better performance, miniaturization and new optical functionalities.

Stefan Bäumer: “I would like to give my students a good basic optical knowledge, which enables them to make a good estimate of what is possible with optical systems. And, of course, also where the boundaries of feasibility lie'” Photo: TNO.

'I mean that we are going to predict system performance, from source to detector, under all circumstances using high-performance computing, among other things, as is done with ray tracing via graphics cards.'

In the future, Bäumer predicts that we will be moving more and more towards end-to-end modeling. Bäumer: “By this, I mean that we are going to predict system performance, from source to detector, under all circumstances using high-performance computing, among other things, as is done with ray tracing (calculating how light rays behave in the optical system, AB) via graphics cards. This is a technique that they already use in the film industry, but it is also gaining ground in the scientific field. I also expect that more attention will be paid to computational optics. Because more and more computing power will become available, there will be more possibilities to find a better compromise between optical hardware and data processing via software. Because of this, different choices will be made in optical systems. Also, nanostructured surfaces and materials will increasingly find their application in optics. For optics in general, developments in the quantum field will unlock a whole new domain.”

With all his knowledge about optical systems and the developments in the field, Bäumer can tell and show his students a lot during the training courses. The training course ‘Modern optics for optical designers‘ covers all the basic principles of optics. “It is important for trainees to understand how things work and which principles are behind them. How do electromagnetic waves and diffraction affect optical systems? What are the polarization effects? These questions all pass in review,” emphasizes Bäumer.

The fact that this training gives an overview of the entire field of optics makes it unique. However, there are many specialist optics courses, which zoom in on a specific area such as non-linear optics or optical design. What makes this training unique, however, is that it covers the entire domain of optics. A team of no less than seven qualified instructors, each working in the field of optics and specialized in a specific sub-area, provides high-quality training.

“Precisely the breadth and amount of homework that students have makes it a tough training. But that homework is the key to becoming familiar with the subject matter. When I talk to the students afterward and ask them what they thought of it, they say that it was tough, but that they learned a lot,” highlights Bäumer. “The training is also very strenuous for me. Every training takes a lot of preparation and there is a lot of after work, but I also learn from it every time and that keeps me on my toes. I want to give my students a good basic optical knowledge, which enables them to make a good estimate of what is possible with optical systems. And, of course, where the boundaries of feasibility lie.”

This article is written by Antoinette Brugman, tech editor of Mechatronica&Machinebouw.

By the end of the training participants are asked to fill out an evaluation form. To the question: 'Would you recommend this training to others?' they responded with a 8.2 out of 10.