Power electronics is never on its own

Electro-mechanic actuators, driven by highly efficient and accurate power electronic circuits, are the working horses of the industry. They determine the performance and quality of many industrial processes. Mechatronica&Machinebouw spoke with Jeroen van Duivenbode, power electronics specialist at ASML, fellow at the Eindhoven University of Technology and trainer at High Tech Institute.

He needs a couple of moments to consider, but then he nods affirmatively: “Yes, there are still products circling the earth that I have designed.” Jeroen van Duivenbode may be working at ASML for close to a quarter of a century, his roots are in aerospace. This background sometimes give him interesting and radically different ideas in the semiconductor world.

Jeroen van Duivenbode: ‘The nice thing about power electronics is that it contains all subdomains of electrical engineering.’

After his MSc degree in power electronics at the Delft University of Technology, Van Duivenbode moved to France to work at – what was then called – Alcatel Espace in Toulouse, now part of Thales Alenia, where he designed power converters for satellite instruments. “That usually concerned radio transmitters and receivers that had to get their power from on-board batteries and solar panels”, he says. “The other side of my work involved simulation models. I did a lot of calculations on power systems for satellites and space stations. Nowadays, you have all kind of tools for that, but back then – in the late eighties and early nineties – we had nothing.”

After five years in France, Van Duivenbode made the switch to Norway, to Norspace, also a specialized company in space electronics. “Among other things, we built surface acoustics wave filters, small quartz-based components that we used to develop high-quality band pass filters. We also delivered systems to the Ariane 5 rocket. You can imagine that we were a little stressed out when her first test flight failed. Luckily, it wasn’t our fault; the malfunctioning was caused by an error in the software. Afterwards, our units were found back in the swamps of French Guiana. They still were operational, although they had fallen back to earth from four kilometers in the air.”

Back in the Netherlands, Van Duivenbode starts working for ASML. In almost 25 years, he has become one of the go-to guys for power electronics. It’s an area of expertise that is certainly not of minor importance for the chip manufacturing systems from Veldhoven. All movements from, for instance, the wafer and reticle stages need hefty power levels, while margins are extremely small. “In the total error budget of the design we are talking about several percent. That translates to the requirement that we have a tolerance of about a tenth of an atom”, Van Duivenbode explains.

'We have to look further than just currents and voltages, but also simulate and calculate how errors seep through in the eventual system performance.'

As with ASML in general, the work of Van Duivenbode is dictated by Moore’s Law. ‘Furthermore, productivity is an important feature of ASMLs machines. A shorter scan time means faster movements and more power.” And a lot more power because there is a cubic relation between productivity and peak power: doubling the productivity requires a eightfold increase in power. “We have been through several of these doublings. In the old days, the electronics for all motions would fit in a shoebox, now every machine needs several cubic meter of power electronics.”

Because the margin of error is so small, even the faintest disturbance can seriously hamper the system. “Once we were working on a new generation of amplifiers. We had increased the voltage and pushed the mosfets to the limits,” Van Duivenbode recalls. “Within two weeks quite a lot of those mosfets had malfunctioned. We tried to find the cause and eliminated every possible explanation, from EMC to system failures, but everything seemed in order. Only one option remained: cosmic radiation.” 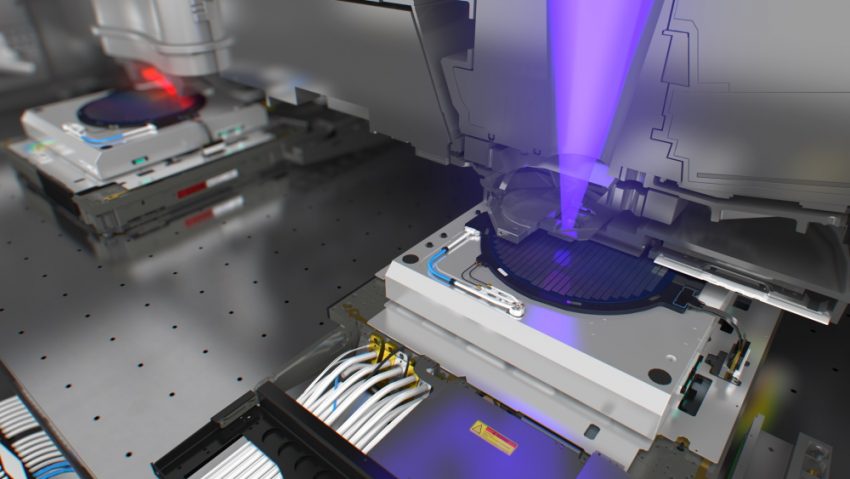 In his earlier career, cosmic radiation was his everyday’s business, but in the semiconductor industry it took Van Duivenbode some efforts to convince his fellow engineers. “Nobody wanted to believe it. So we built a test setup with thousands of transistors. In the lab several broke down every week. Than, we moved the setup to the Municipal Cave in Valkenburg, underneath a thick layer of earth and limestone. After eight weeks, not a single transistor had failed. Since that experiment it is known in the industry that you have to take cosmic radiation into account, not only for big chips, but for small mosfets as well.”

Next to his work at ASML, Van Duivenbode is research fellow at the Eindhoven University of Technology, of course in power electronics. Since several years, he is also trainer at High Tech Institute, for the course ‘Actuation and power electronics’. “That training is interesting for everyone involved in high-precision systems. And that doesn’t necessarily mean nanometers as at ASML”, assures Van Duivenbode. “On micrometer scale it is just as important to see how you can fit the power electronics into your mechatronic system. And even when you talk about something ‘rough’ as the drive system of a car, you still have to make sure it is stable and reliable.”

“Power electronics is a profession that doesn’t stand alone”, he continues. “It is always in the service of the system. No one will ask just for a circuit that can generate a couple of kilowatt. That is not interesting. ”

'The key is the whole system, and that is precisely the focus of the training.'

“The nice thing about power electronics is that it contains all subdomains of electrical engineering. Apart from all standard building blocks for power electronics, like mosfets, diodes and coils, you need to know about analog electronics as well, for accurate measurements, and about digital technologies and VHDL. Electromagnetic compatibility is a theme because high voltages and high currents play into the hands of failures. So you have to understand EMC, just as thermal design since components can heat up quickly. You have to cope with that heat. A heat sink might be the solution but than you have to be aware of capacitive coupling.”

And than there is reliability. “At those high powers, the electronics is pushed to its limits. The PCBs have to work hard, so they are more susceptible to failure”, says Van Duivenbode. “That means you got to know about reliability and lifecycle testing.”

Van Duivenbode is one of the teachers of the training, the other two being TUE professor Elena Lomonova and Coen Custers from Philips Innovation Services. Apart from power electronics and calculating on magnetic circuits – the parts that Van Duivenbode has taken on him – the course is also about actuators. Linear and planar Lorentz actuators, piezo actuators, they all are covered. Relatively new and promising are the so-called reluctance motors.

“That is a variety in which you let a current flow through a coil and use that to attract a piece of magnet steel, or soft iron”, Van Duivenbode explains. “Reluctance motors can deliver high power densities. The disadvantage is that those forces are highly non-linear and that the motor can only generate pull forces. At the university, in the group of Elena Lomonova, a lot of research is done to find a solution for this non-linearity. When that is found, the high power density makes reluctance motors very attractive for many applications.”

'The industry is not there yet, so superconductivity is still considered exotic in the training.'

Another emerging technology is super conductivity. “That is already used in, for instance, MRI scanners. There also has been a successful Dutch test to use super conductivity in underground power lines. The principal was proofed, but the project didn’t get any follow-up”, Van Duivenbode explains. “The first windmill with superconducting magnets has been built as well. Those magnets were in the rotor, so the whole superconducting system had to rotate with the blades. Quite an achievement, if you ask me. The next step is to make it economically feasible; someone has to take that step and invest in it.” The industry is not there yet, so superconductivity is still considered exotic in the training.

By the end of the training participants are asked to fill out an evaluation form. To the question: 'Would you recommend this training to others?' they responded with a 8.1 out of 10.

Become able to initiate, specify & guide the development of a special motor or select the proper off-the-shelf actuator.